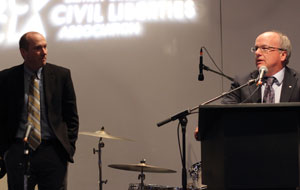 Congratulations to Craig Forcese and Kent Roach, who have been named as two of the Top 25 Most Influential Changemakers of 2016 by Canadian Lawyer magazine! Here is what the magazine has to say about them:

“This duo more than anyone helped educate the Canadian public on the pitfalls and issues of the previous federal Conservative government’s proposed anti-terrorism laws. Forcese and Roach’s approach to influencing public policy development also changed the way academics contribute it. They ditched traditional models in order to engage in real time on bill C-51, launching a blog about it (antiterrorlaw.ca), publishing their work on the world’s largest open-access database — the Social Science Research Network — sending it to public policy-makers, writing op-eds, and appearing before parliamentary committees. Their book False Security: The Radicalization of Canadian Anti-terrorism, [was] published this fall.”